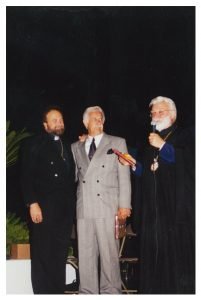 Nick Kossaras was born in Flint, Michigan and moved to Fresno with his family in 1966. For over 45 years, Nick’s career focused on real estate and investments. He also served as President of the Parish Council at the Saint George Church in Fresno. He and his wife Sandy raised four daughters, Kim – of blessed memory, Kris, Jill and Nici, all of whom were active in the Church. The Kossaras family enjoyed the outdoors and frequently visited their property – the Sally K Ranch – hosting family gatherings, hoedowns and picnics in the barn. They had considered turning it into a recreational facility or dude ranch with some residential housing. But then, Bishop Anthony had an idea to start a camp and Father John Bakas recalled the Kossaras’ having a suitable property. At the time, the Kossaras family had just returned from an inspirational pilgrimage to Greece and the Holy Land led by Father John Bakas, and felt compelled to do something significant for the Church and for the spreading of the Gospel. After prayerful consideration, Nick and Sandy made the decision to donate the Sally K Ranch to the Diocese of San Francisco in 1979, which became the start of a new chapter, especially for the youth of the Church. What resulted was a donation of the 180-acre Sally K Ranch, which would become Saint Nicholas Ranch and Retreat Center. Nick is now married to Carmalee, and for 34 years they have continued to enjoy the love of their family including 17 grandchildren, 16 great-grandchildren and two more great-grandchildren on the way. He has found great pride and joy witnessing the development of Saint Nicholas Ranch over the years, and seeing his children, grandchildren, and now great-grandchildren benefit from this incredible ministry. 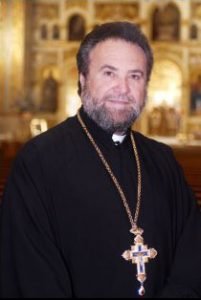 V. Rev. Father John Bakas immigrated with his family to the United States from Greece in 1958. The family settled in Albuquerque, New Mexico and worked in restaurant related businesses. While a student at the University of New Mexico, he met Maria-Ximena Campos and they married on January 18, 1970. After training with the Archdiocesan Program as Priest with Lay Profession supervised by the Holy Cross Greek Orthodox School of Theology, Father John was ordained to the Diaconate on March 7, 1975. The following year they moved to Modesto, CA where Father John was ordained to the priesthood on January 21, 1979. Shortly thereafter, the family moved to Fresno, CA during which time Father John worked on the development of St. Nicholas Ranch and Retreat Center, and became its first Director. While living in Fresno, Father John served as Chaplain and President of the Valley Children’s Hospital Foundation where he led the fundraising drive to build a new $170 million-dollar facility, now in operation as the nation’s state of the art, premier children’s hospital. After serving in several parishes, Father John became Dean of Saint Sophia Greek Orthodox Cathedral in Los Angeles in 1995. Along with his leadership of the Cathedral, he spearheaded the drive for the major renovation of the Cathedral grounds and adjacent buildings. This renovation and renewal spawned the redevelopment of the surrounding area into what is now the Byzantine-Latino Quarter of Los Angeles. He is the founder of the Diocesan Camp Agape “Kids ‘n’ Cancer” program; the founder of Camp Axios, a camping program for Los Angeles at-risk inner city youth; the Rotary House Children’s Hospice in Fresno, CA; and Project Nino-Mexico that offers free medical care for poor children in Mexico through Rotary International. He is the Co-Chairman of the Police-Clergy Forum of the Los Angeles Police Department and serves as Commissioner of the Los Angeles Commission on Children, Youth and Families. He currently also teaches Greek Orthodox Theology at Loyola Marymount University in Los Angeles. He and Presvytera Maria have four adult children – Andrea, Kassandra Kirages (Dan), Katia, and Alexi (Mira); and five grandchildren – Lucas, Juliet (Kassandra and Dan), Anastasia and John (Katia) and Noelle (Alexi and Mira).

Metropolitan Anthony was born on March 2, 1935, in the village of Avgeniki on the island of Crete, the third of six children, and grew up during the German occupation of World War II. For his early education he attended the ecclesiastical school of Chania, Crete. He continued his education at the Halki Theological School in Turkey, graduating in 1960. While at Halki he was ordained a deacon on July 27, 1958. On September 29, 1960, he was ordained a priest. After his ordination as a priest he emigrated to the United States of America. While serving as a parish priest, he earned a Master of Divinity degree from Yale University. He continued his studies for a doctorate at the University of Chicago and the University of Wisconsin. In 1974, he was appointed Dean of Saint George Cathedral in Montreal, Canada, where he served until his elevation to the episcopacy. On May 21, 1978, he was consecrated titular Bishop of Amissos. As Bishop of Amissos, Bishop Anthony served the Eighth Archdiocesan District in Denver, Colorado until 1979. On March 15, 1979 he was elected Bishop of San Francisco.

On June 7, 1979, he was enthroned as the first bishop of the newly created Diocese of San Francisco. He served as the Bishop and later Metropolitan of San Francisco for over twenty-five years, overseeing the western states of California, Arizona, Nevada, Oregon, Washington, Alaska, and Hawaii. During his tenure at San Francisco, Metropolitan Anthony led the expansion of ministries and programs, including the establishment of Saint Nicholas Ranch and Retreat Center, a conference and retreat center located in the Sierra Nevada foothills. His vision was to create place that would provide for the gathering of young and old alike for spiritual, educational and cultural programs. He saw this dream fulfilled and loved to spend time at the Ranch, enjoying the beautiful surroundings that reminded him of his homeland of Crete.

Metropolitan Anthony reposed in the Lord on Christmas Day 2004 after a brief illness.